The world's newest nation is both drying up and drowning

Share
Facebook Twitter LinkedIn Pinterest Email
In this traffic, between the cities of Bentiu and Ding Ding, is a group of women, pushing to dislodge their makeshift raft that has become stuck in mud, weighed down by six children. The men in the family went back north to keep their cattle safe, and the women were left to push for four days in the hope of reaching higher ground. Along the way, their food ran out, said one of the women, named Nereka. Her 5-month-old baby wails as she talks.
“Of course, I’m worried about my children,” she said. “That’s why we keep moving.”
Ravaged by years of conflict, there has barely been enough peacetime in the world’s newest nation to begin building. Only 200 kilometers of its roads are paved. Now, South Sudan is dealing with biblical floods that began as early as June and were made worse by the climate crisis, which it had little hand in creating. 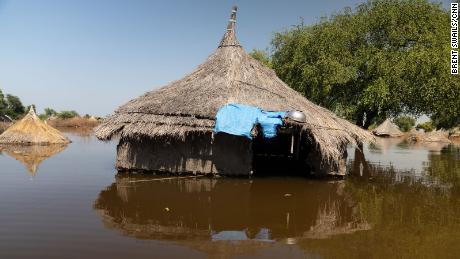 This deluge, which is the worst in 60 years according to the UN, has swallowed not only the very roads that people here need to escape, but also their farms, homes and markets.
For years, South Sudan has been experiencing wetter-than-normal wet seasons, while its dry seasons are becoming even drier. The rainy season has ended, yet the water that has accumulated over months has yet to recede.
South Sudan is one of many places in the world struggling with this twin problem of drought followed by extreme rainfall, which together create prime conditions for devastating floods.
More than 850,000 people have been impacted by the floods, the UN agency coordinating the relief effort there told CNN, and some 35,000 of them have been displaced.
Remote towns like Ding Ding now sit largely abandoned. The traditional straw roofs of many homes here peak above the waterline, their walls still submerged.
Some people searching for food here have resorted to eating the lilies that have started to sprout on the floodwater’s surface, as an entirely new ecosystem begins to form in this radically changed landscape.
It’s a grim picture for a country that is only 10 years old. After gaining independence from Sudan in 2011, just two and a half years later, South Sudan descended into a brutal civil war that only ended last year. Deadly, inter-communal violence continues to be common as people fight over increasingly scarce grazing land.

South Sudan is no stranger to seasonal flooding, but officials in Unity State say they haven’t seen anything on this scale since the early 1960s. Ninety percent of the state’s land has been affected by the flooding, and the next rainy season is only five months away. Officials in Bentiu say they are worried the situation will only get worse.
“We are told the water behind me will not go now, it will not recede or dry up. It’s going to take a while because it’s deep water,” said Minister Lam Tungwar Kueigwong, the state’s minister of land, housing and public utilities.
.m-infographic_1638823612970{background:url(//cdn.cnn.com/cnn/.e/interactive/html5-video-media/2021/12/06/South_Sudan_flood_map_375px.png) no-repeat 0 0 transparent;margin-bottom:30px;width:100%;-moz-background-size:cover;-o-background-size:cover;-webkit-background-size:cover;background-size:cover;font-size:0;}.m-infographic_1638823612970:before{content:””;display:block;padding-top:186.02%;}@media (min-width:640px) {.m-infographic_1638823612970 {background-image:url(//cdn.cnn.com/cnn/.e/interactive/html5-video-media/2021/12/06/South_Sudan_flood_map_780px.png);}.m-infographic_1638823612970:before{padding-top:96.41%;}}@media (min-width:1120px) {.m-infographic_1638823612970 {background-image:url(//cdn.cnn.com/cnn/.e/interactive/html5-video-media/2021/12/06/South_Sudan_flood_map_780px.png);}.m-infographic_1638823612970:before{padding-top:96.41%;}}
Scientists are now able to calculate how much the climate crisis may have played a role in most extreme weather events. But in this part of the world, it is notoriously difficult to measure with certainty because it has such huge variations in its natural climate to begin with.
Making projections for drought is particularly hard here, but what scientists do know is that the more the Earth warms, the more the Horn of Africa and its surrounding countries will experience extreme rainfall, making it more susceptible to flooding. That’s largely because a warmer atmosphere can hold more moisture, which triggers more rain.
The world is already 1.2 degrees Celsius warmer than it was before it began industrializing, and Africa overall is seeing higher rises in temperature than the global average.
To those dealing with this problem in South Sudan, the climate crisis is clearly here already and offers the rest of the world a glimpse of what complications it could bring.
“We are feeling climate change. We are feeling it,” said John Payai Manyok, the country’s Deputy Director for Climate Change.
“We are feeling droughts, we are feeling floods. And this is becoming a crisis. It’s leading to food insecurity, it’s leading to more conflict within the area because people are competing for the little resources that are available.”
While droughts and floods may seem like polar opposites, they have more of a relationship than is obvious. 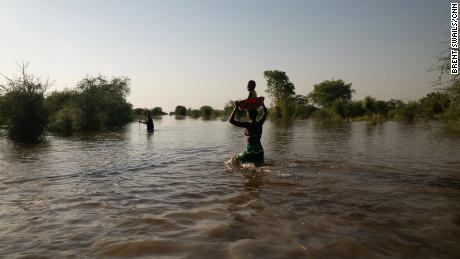 “After you’ve had a long period of drought, soil may be hardened, may be very dry, and so you’re going to get more (rainwater) runoff, and that will exacerbate the risk of flooding,” said Caroline Wainwright, a climate scientist at the University of Reading, who studies the East African region.
“And all this potentially aids bigger storms too, and more intense rainfall. That’s something we might expect to see more of — periods of drying and these really intense storms.”
The question now is not only how to clean up the mess, but how to adapt to better withstand these extreme weather disasters.
Like many nations suffering the worst impacts of the climate crisis, South Sudan accounts for 0.004% of the world’s greenhouse gas emissions. The US, by contrast, accounts for more than 15%. But much of the suffering here comes from a lack of tools and systems to prevent an extreme weather event turning into a humanitarian disaster.
Still, the industrialized world, which played the biggest role in the climate crisis, is still failing to deliver on a $100 billion a year it promised the developing world to help it cut emissions and adapt to the enormous changes. A UN report released in last month found that adaptation costs in the developing worlds are already five to 10 times greater than current funding. By mid-century, it is expected to reach $500 billion dollars.
While its neighboring countries move ahead building dams and more permanent dikes, South Sudan has failed to adapt and remains at the mercy of its rivers, Manyok said. Human activity is also worsening the health of rivers and their capacity to hold water in during heavy rainfall.
Manyok said the country desperately needs to adapt.
“We must introduce technologies which are water friendly and efficient, and along the Nile, we must construct dams and remove the siltation,” Manyok said.
Siltation is usually caused by sediment or soil erosion, and can build up in rivers and block the natural flow of water, exacerbating flooding. 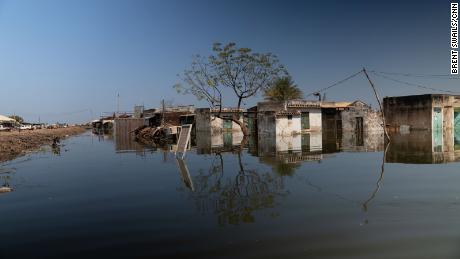 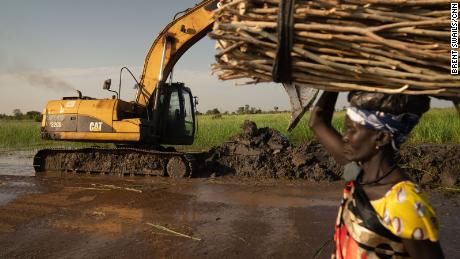 Swaths of Rubkona, a market town next to Unity State’s capital Bentiu, have been abandoned. The markets and homes here sit ghostlike, submerged under water that continues to rise at a slow, tortuous pace.
Nearby, Pakistani engineers from the UN mission are using the few heavy machines available to repair and strengthen a hastily constructed mud dike that has kept the airport and a camp of nearly 120,000 displaced people on dry ground. UN officials say a breach here would be catastrophic.
The battle is constant as each day water continues to crawl up the dike’s wall. It seeps across the red clay road toward the runway and the camp’s gates.
The vast majority of the IDP’s arrived years ago, having fled South Sudan’s brutal civil war. They are now sharing space and increasingly limited resources with the new arrivals.
A Doctors Without Borders hospital inside the camp is over capacity. Staff are treating a massive spike in the number of malnourished babies since the flooding began.
“We had 130 cases in the past month. Previously, we might have 30-40 in a month,” Managing Director Kie John Kuol said.
Back in Ding Ding, the town’s school, which was rebuilt in 2017 after it burned down during the civil war, is also partially submerged in the water — progress is once again suspended. According to UNICEF, the flooding has destroyed, closed, or impeded access to more than 500 schools in South Sudan. 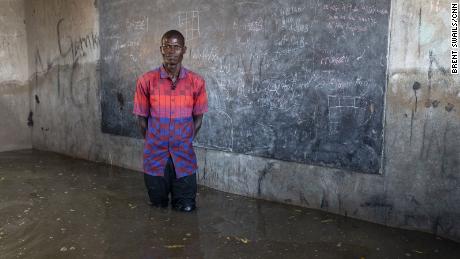 As teacher Kuol Gany tours his classroom, the water reaches his knees. Behind him is a chalkboard scrawled with equations and English-language definitions for words.
“Relief is the assistance given to the people during disaster,” one definition reads.
Gany only had a few years of teaching in this new building before the floods hit. He worries he’ll have to abandon it, and even his town, for good.
“It’s still increasing, the water,” he said. “There are diseases and there are snakebites. And we are drinking this water too.”.
James Ling, a resident of Ding Ding, said he returned briefly to see what he could salvage from his home of eight years. He waded through the water to reach his home, only to find nothing left, except for his children’s drawings on the walls.
“Since the conflict erupted, we have never had a rest,” he said. “We have been constantly running, displaced. Our children have had no relief from the dangers.”
Share. Facebook Twitter Pinterest LinkedIn Tumblr Email

Snow and ice will return to the South this week. Maybe.